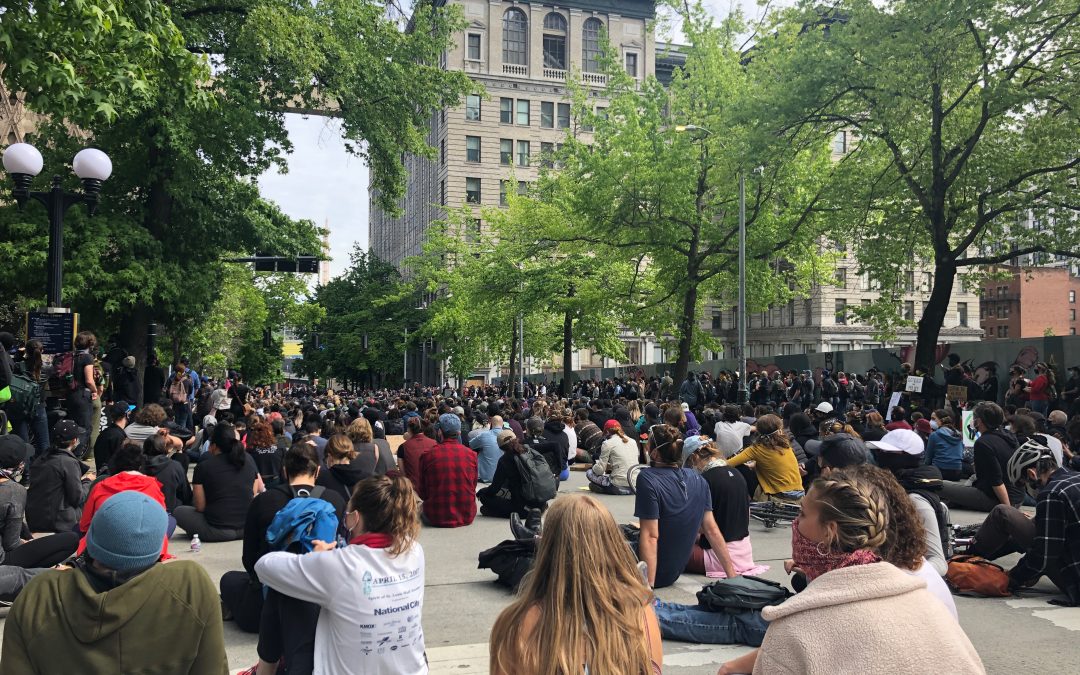 When we founded the Diamante Scholars a year ago, one of the core tenets of the program is that it “helps high school students with overlooked and unseen potential find a path to higher education and career success.”

What has happened in this country over the past ten days is all about overlooked, unseen potential. It’s about systemic racial discrimination. It’s about the fact that the United States is a fundamentally racist nation that (hopefully) is about to admit that and do something about it.

Achieving equality begins and ends with understanding what life is like for someone other than yourself. My wife and I attended the George Floyd protest at Westlake Center in Seattle on Saturday, May 30. And we saw people of all colors there. Peaceful. Families. And we also saw agitators — like a white guy carrying a baseball bat. Who brings a baseball bat to a peaceful rally? We all know where that rally went. But those peaceful people of all colors were not the instigators of the violence or the looting.

We also attended a protest rally outside the Seattle Courthouse on Wednesday, June 3 that was put on by Seattle Black Lives Matter. Again, people of all colors were there. And one of the speakers, who I believe was Ebony Miranda, made a point of thanking all of us for being there. They also reminded us that when it comes to defining the issues that matter, black people are the ones who define  what matters to them. They are the ones living with racist oppression every day because of  their  skin color.

I cannot know what it feels like to be black – I’m a white male and have lived my life with privilege. Every step of the way. For years my black friends have told me about what it is like to be them. To be highly educated and highly successful and to still endure the constant judgment and discrimination that comes just from the color of their skin. One of my friends years ago educated me about DWB traffic violations – Driving While Black. About how often he is pulled over in his car simply for being black and driving a nice car.

But it’s not just this one friend. This past week a close friend, Dave Cotter, who is black — and a successful technology executive — wrote a heart wrenching blog post about what it is like to be him. About being pulled over in his own neighborhood and in the surrounding neighborhoods and being asked “is this your car?” and “why are you here?” He’s even been pulled over driving his ski boat, and asked if that was his.

For those of us who aren’t black this moment is all about listening. It’s all about empathy and understanding. And all about empowering, about hope, about opportunity for action.

And about how the direction we need to head is clear.

Why am I writing this on the Diamante Scholars blog? Because we are committed to helping students find their paths and realize their potential. Regardless of race, ethnicity, religion and many of the many other factors that make us human and unique. Because we are committed to seeing our students for exactly who they are: people with dreams, people with futures ahead of them, people who deserve to be seen for their talents and actions.

While racial injustice and racial discrimination are not new, what does seem to be new is the broad acknowledgement that enough is enough, and it is time to do something about it. And what is getting done is messy. It is certainly unfortunate that violence and looting have happened, but it’s a fundamental tragedy that blacks have been systematically oppressed for 400+ years. And we have to change this.

On August 28, 1963 Rep. John Lewis gave a searing speech at the “March on Washington” and his words are just as urgent and relevant today as they were then. Which is tragic in its own right, but this passage seems to be fit once again for what we are seeing across our nation:

“To those who have said, “Be patient and wait,” we have long said that we cannot be patient.  We do not want our freedom gradually, but we want to be free now! We are tired. We are tired of being beaten by policemen. We are tired of seeing our people locked up in jail over and over again. And then you holler, “Be patient.” How long can we be patient? We want our freedom and we want it now. We do not want to go to jail. But we will go to jail if this is the price we must pay for love, brotherhood, and true peace.”

We are committed to seeing our students for exactly who they are: people with dreams, people with futures ahead of them, people who deserve to be defined by their deeds and actions. And who deserve to be free. We strive to empower our scholars to use their voices, to be advocates of racial justice. And their voices are here for us to listen to them, and for us to learn from them as well.

Here is how Kristine and I are personally supporting change where we live, in Seattle.

We support the brave protesters who are literally putting their lives on the line to stand up for justice by helping them with bail as they get arrested.

We support the black-owned businesses that are critical employers and fixtures in our community.

Finally and most important, we are listening and learning:

We found some of the above resources from the 2020Protests.com website, which also lists protest resources for people in California.

Do what others doubt. Help end racial injustice.